When you’re practising or playing a round of golf, you can add some spice and fun into the mix by playing some putting games. It can put more pressure on you so you know how to handle it when you’re facing crucial putts, and of course you can win some side bets if you putt well! 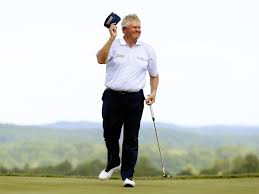 Colin Montgomerie used to play this putting game to help him with those short pressure putts.

Hole as many short putts as you can in a row. When you miss one restart counting from one again. As you hole more and more putts the pressure really starts to mount!!!

Monty used to regularly hit well over 100 putts before missing one.

How many can you hole in a row?

Find an opponent on the putting green and work your way around the putting green playing them in a matchplay format. You can add some spice by playing for prize money – say $1 per hole. So if you win 3 holes you win $3. The key to winning this putting game is to avoid three putts

Putting Game #3 – Five Over Five Under

This one is described in detail in pur Psychology lesson – the idea is that you use five short putts around the hole. You start on level par and the first putt is for a par. If you hole the putt you stay at level par. If you miss the putt you go to one over par. The next putt is a birdie putt. If you’re level par and hole it you go to one under. If you miss you stay at level par. The next putt is a par putt, and so on…

And when you get to four under or four over, the pressure really mounts so it’s great practising those pressure situations

For a final bit of fun – keep a note on your score card of how many putts you took on each hole, and make a special note of one putts and three putts.

For each one putt you make, every opponent putts a dollar in the hat and you all do the same for each other.

For each three putt you make, you have to put a dollar into the hat, and the same for your opponents.

The one that had to put the least amount of money into the hat takes the cash!

But do the decent thing and buy them a beer with it!